Am I a Republican Now?

One thousand, nine hundred and thirty-four miles after he picked up our rental car in Seattle, Harry returned it when he flew back from Los Angeles to Cape Cod on Sunday. As he was heading for the airport, Sarah, Jeffrey, Mariah and I headed to Dodger Stadium to watch the LA Dodgers play the Anaheim Angels in a “freeway series.” It’s just like a Gotham City “subway series” but without the pinstripes.

The fans were spirited, heavy drinking, and “Bar-Scene-in-a-Star-Wars-Movie” diverse. It was a good game, well-played in 90-degree heat by athletes about whom I knew nothing whatsoever. Fortunately, we had procured infield loge box seats months ago just under the cover of a deck in the shade on the first base line.

The fans at this stadium do not sing Sweet Caroline at the seventh inning stretch. The entire stadium sang a very animated version of Take Me Out to the Ballgame instead and the Dodgers won at home which is apparently not a common occurrence. It may sound a bit nostalgic for halcyon days of yore, but it was profoundly reassuring to be among a sea of happy, peacefully co-existing strangers, joined by their traditions, a sense of community, a shared victory and an awful lot of beer. 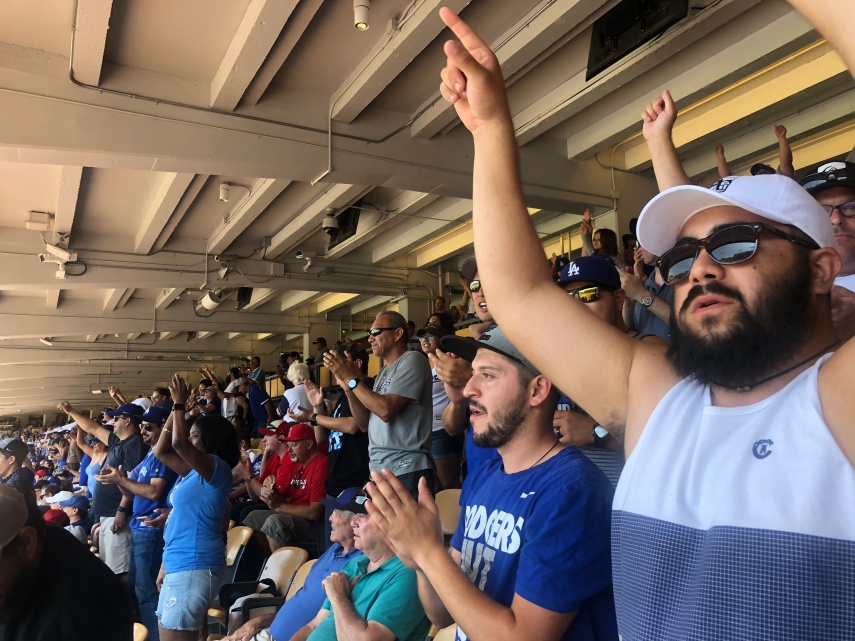 On Monday, Mariah and I visited the Ronald Reagan Presidential Library in Simi Valley. It is the most old-fashioned and traditional of the presidential libraries we have visited, and the staff seemed to be still inhabiting the Reagan era in both appearance and demeanor. We spent the better part of five hours learning about Reagan’s childhood, Hollywood career, and political rise. We read many of his original letters and speeches, viewed archival television footage and listened to his radio addresses. Mariah also may have taken a brief horseback ride with the Gipper.

Unlike the Clinton Library which incorporated elements of controversy and difficulty in their exhibit, such as a significant display on Monica Lewinsky, Reagan’s Libary focused exclusively on the positive. There was no discernible mention of his personal life (including his first wife and two children) before he married Nancy. His domestic and foreign policies and diplomatic efforts were presented as having been prescient and flawlessly executed. His international diplomatic accomplishments received particular recognition. To see the actual document with his handwritten notes that he read at the Brandenburg Gate was remarkable. And then, for extra measure, the library invited visitors to tour his actual Air Force One aircraft furnished complete with jars of jelly beans as it had been during his presidency. 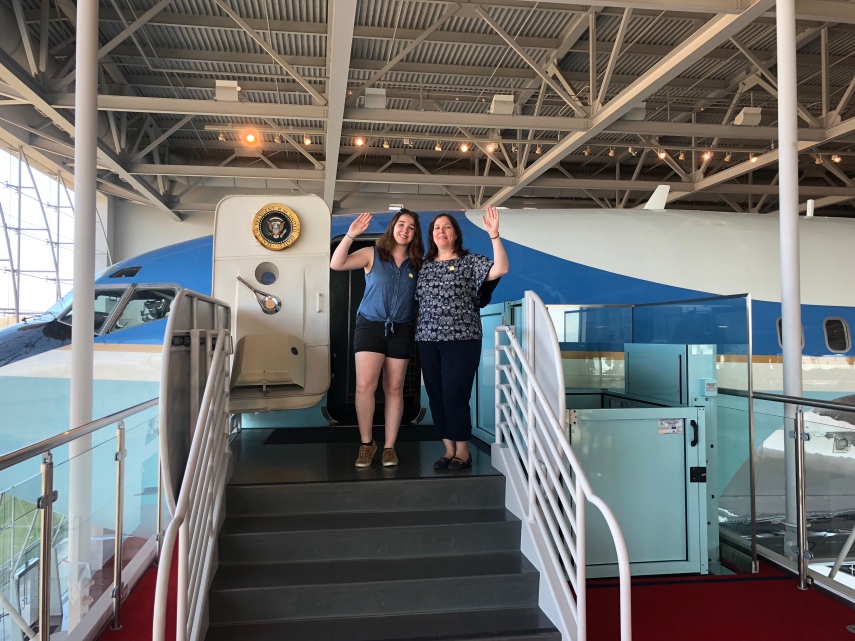 A deeply moving room was devoted to his attempted assassination. The filmed footage of the moments when the gunman shot him was horrifying. However, the depiction of his survival and recovery with his signature wit and charm intact engendered great relief and affection. As a result of our time at the Reagan Presidential Library, I found myself somewhat seduced by the entire narrative of the great communicator’s presidency. The poster that follows is from his actual campaign. I left wishing we had someone with his skills and values leading the country and delivering this particular message now.

Continuing to hit our west coast bucket list with wild abandon, on Wednesday Mariah and I spent the day and night aboard the Queen Mary. She is permanently docked in Long Beach, California. We learned all about the ship’s past, including her groundbreaking construction, her duty as a troopship during WWII and of course, her glory days as the world’s most luxurious and technologically advanced ocean liner. 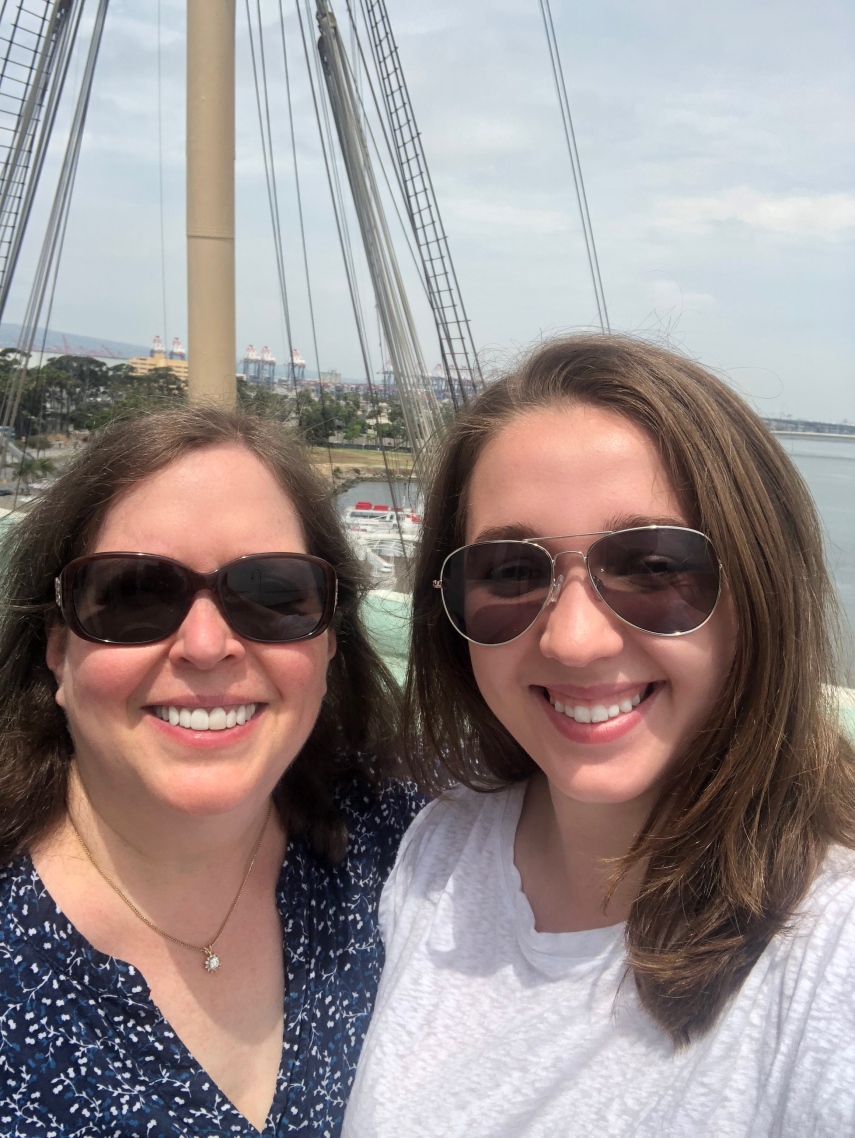 My father had returned to the United States after his service in WWII on a troop ship crammed with servicemen on deck. His small black and white photos of the conditions they endured aboard ship during their crossing made an indelible impression on me as a young child. For this reason, I was fascinated by the Queen Mary’s pivotal role in guiding the Allied Forces to victory. Nicknamed the “Grey Ghost” after receiving a hauntingly stark paint job, the ship’s impressive speed and size made it an ideal troop hauler often carrying as many as 16,683 men in a single voyage.

While aboard we toured several exhibits including an enormous ship model gallery, the engine room, and the communication room.  Inevitably, we became lost and confused quite a few times while navigating between the ship’s many decks. The highlight of our stay, however, was an obscenely decadent dinner at their upscale restaurant, Sir Winston’s, followed by splurge accommodations in the Eisenhower Suite. The Eisenhower is one of the most spacious and luxurious suites on the ship complete with a separate living room suitable for entertaining, a spacious private bedroom, two bathrooms and a smaller bedroom for one’s butler or nanny. The Queen Mary has seen much better days, and the deferred maintenance and allover wear and tear caused by their heavy conference, event and tourist traffic was evident even in our oh-so-regal suite.  It was nonetheless a wonderful treat to spend a day and night aboard.

Our only regret was that our favorite crewmember was unable to take shore leave with us. Thankfully, we will always have this photo to remember him. 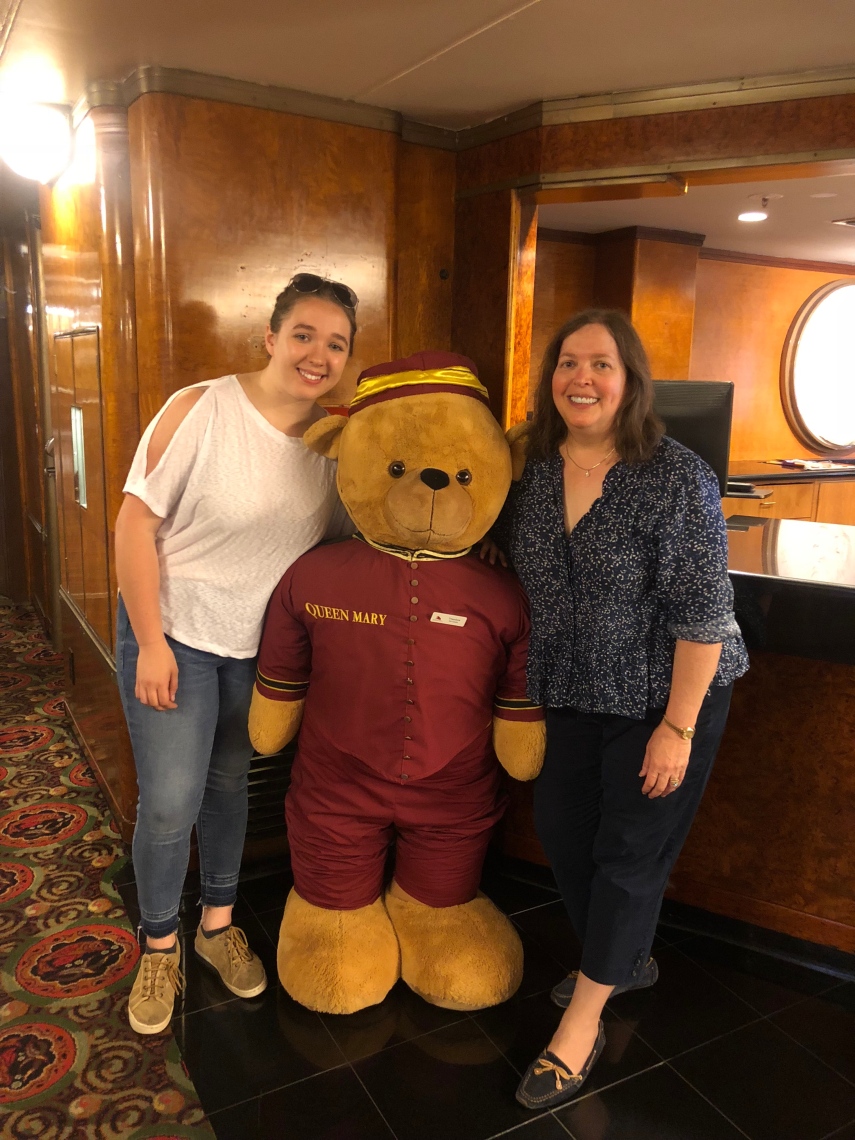