No Vacancy at the Joy Motel

First an update: it turns out that the white pride radio billboard Mariah and I photographed and posted yesterday had already attracted quite a bit of national attention. The website address provided on the billboard links viewers to a KKK website as they are the billboard’s acknowledged sponsor. Enough said. Last night, we stopped for dinner at a restaurant and then slept in a hotel which were both marketed heavily to bikers. This was a new experience for both of us. (Mariah read a flyer in our hotel room which announced that hotel guests could bring their bikes out back for a free wash and towel dry. She asked me how many people I thought would be traveling with bicycles and need the amenity. She was serious; which is one of an infinite number of reasons why I love her). The teachable moment for us, other than the lesson about the flyer’s intended audience, was that everyone was genuinely nice to us despite our looking as if we were extras from a recent Woody Allen film accidentally sent back in time to the 1953 closed set of Marlon Brando’s, The Wild One. Ultimately, on balance, Arkansas didn’t appeal to either one of us very much. From the confines of our car, we were turned-off  by the billboards and stores which lined the roadways selling everything from confederate flags, rice bran and night crawlers, fireworks, firearms, lingerie night at the local bar and redemption through praying their way. Today we drove through Missouri and then into Oklahoma. It was one of the few days this summer when we scheduled ourselves to drive more than 350 miles. It was a long slog. Mariah and I planned to stop just once en route in Oklahoma to see a much touted sight preserved since Route 66 travel dominated the American consciousness. It is called the Blue Whale of Catoosa. With great anticipation and excitement we made our way to the middle of nowhere to see the great whale and pay homage to simpler days gone by. We arrived and just couldn’t stop laughing. It looks no different than hundreds of other oversized rough replicas of animals or people readily found on miniature golf courses and road sides all over the United States. Cape Cod’s fisherman on lookout in Hyannis permanently perched by Steve ‘N Sues Par-Tee Freeze was every bit its equal in appeal.  Somehow I doubt travelers are making nostalgic pilgrimages to pay their respects to our handsome fisherman. We concluded our evening by watching the new Pixar movie “Inside Out”. I maintained my perfect record of crying at every Pixar movie I have ever watched. I simply cannot help myself. I cried when Frosty the Snowman first melted in 1969 and I have been crying at every poignant animated moment since. 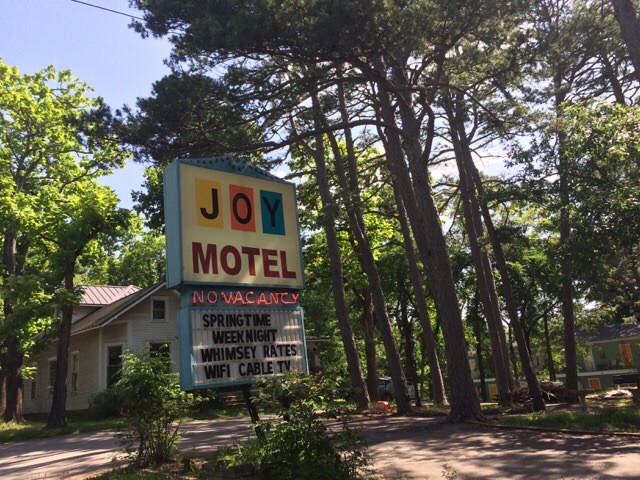