At Rest in the Cyclone

We spent a fascinating day in Petersburg, Kentucky at the Creation Museum.  Hundreds of thousands of visitors who flock there every year believe that evolution is a philosophy masquerading as a science. Everyone with whom we interacted was certain that proponents of evolution are sadly mistaken victims of propaganda. I have a bachelor’s degree in Anthropology with a concentration in Primatology, so the dichotomy between what I know to be true and what the other attendees at the Creation Museum know to be true shocked me.

When we were leaving the museum we noticed that the cars in their massive parking lots held license plates from several dozen states. I had no idea that so-called creation science was embraced by so many. It was an eye-opening and sobering experience. I wish I could have left a complete set of VHS tapes of the Magic School Bus in each of their cars. Or something, anything, to help to bridge the divide.

When we checked into our accommodations in Louisville, Kentucky, things took a definite turn for the better. Imagine a geodesic dome with a terraced floor constructed out of salvaged driftwood. Then envision an assortment of brightly colored fabric triangles from someone’s grandmother’s quilt. Line the walls of the dome with the most colorful of the triangles and cover the floor with brown shag carpeting that was popular in the 1960’s. Now sink a platform bed into one of the terraces, set-up an old working record player housed inside a laminated wood console and add an eclectic stack of vinyl 33s available for the playing. Bring the whole thing to a hipster neighborhood, and install it in the lower level of an art gallery that remains open 24/7. Title the installation “Asleep in the Cyclone” and invite guests to spend the night inside. We are staying here while we are in Louisville, Kentucky for the next two nights.  So far we have listened to vintage Aretha, The Byrds, Stevie Wonder, Donovan and Jefferson Starship. Trust me. The photograph doesn’t do this place justice. It is the coolest thing. 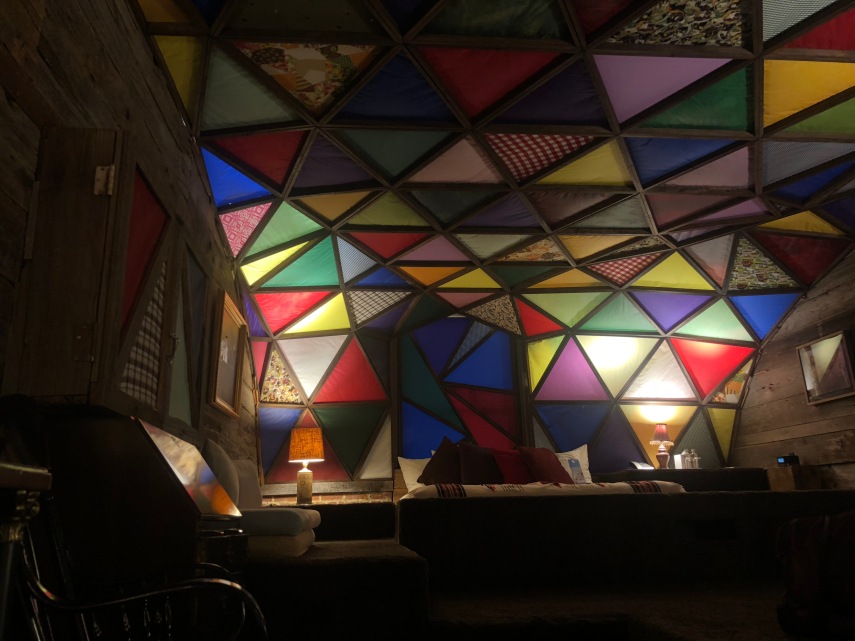