San Juan County, New Mexico must be a very tough place to live. During a quick pit stop at their McDonalds (which was the only place that appeared to serve food in town), I was greeted at the door by a formidable, armed, private security guard. Abandoned and dilapidated trailers lined the roads, comprising the majority of the area’s visible housing units. A disgruntled resident expressed their sentiments on a sign affixed atop abandoned real estate. It seemed representative of the community’s mindset. Poverty was rampant. Billboards about domestic abuse resources and the perils of drug addiction outnumbered other advertising.

We drove through this unforgiving environment to rendezvous with a woman named Gayle, waiting for us in a parking lot of an abandoned sports facility. I had been in communication with her disembodied voice since January, when I made one of my first overnight reservations for our trip, to reserve the property she managed for last night’s single night’s stay.

Mariah, Harry and I met and followed Gayle through a mile or two of back country roads and then several more miles of unpaved, barely passable, Bureau of Land Management dirt excuses for roads. We continued through a series of heavy gates, by signs on barbed wire-laden posts discouraging trespassers. It reminded me of the opening sequence at the start of every classic horror film. It dawned on me sometime shortly after we began driving on the dirt road that I was out of my comfort zone.

Our destination was Kokopelli’s Cave, a totally unique 1,650 square foot one bedroom dwelling which appears regularly on lists of the most-unusual places to stay in the world. The cave is the brainchild of a geologist who, in 1980, conceived of the idea to blast the space out of sandstone, 70 feet below the surface. His original plan was to use it as his office, but he soon realized that it would be totally inaccessible to all but his heartiest clients. After years of it sitting idle, in 1997, he repurposed the cave and opened it to the public as a Bed and Breakfast.

We parked our car on a rock outcropping overlooking the La Plata river. Mariah (a multi-sport varsity athlete), Harry (a fit and avid outdoorsman), and I (a nice Jewish girl from Philadelphia who had no business even wearing Keen shoes), then made our 70 foot descent down the side of the cliff – a seven story drop. We followed Gayle down the not quite stairs built out of hand hewn rocks and construction debris while wearing backpacks with our provisions for the night.

I entirely misplaced the last vestiges of my comfort zone while descending the not really stairs using both of my hands for balance. We hiked past the geologic evidence of five prehistoric periods before reaching our front door. At one point, we walked by a section of the cliff wall with the remains of ancient stream beds containing unusual exposed sections of petrified trees and coal deposits. I am certain that the path we were taking, with its switchbacks and loose rocks, was more suitable for an experienced and agile mountain goat than for me.

The situation improved dramatically once we reached the first of two terraces enroute to our front door. While standing on the terrace (or in my case, while clutching the sandstone wall next to the terrace), the view of the Four Corners Flatland was breathtaking. We could see Arizona’s Carrizo mountains, Colorado’s Ute Mountains, and the town of Ship Rock, New Mexico. The front door entrance to the cave was 280 feet (28 stories) above the river. We were encouraged to leave out kibble provided on the terraces to feed ring-tailed cats, western spotted skunks, rabbits and squirrels that frequented the area. I was greatly relieved when we were visited by wonderful hummingbirds, with their wings flapping at great speeds, instead. (Mariah shot a wonderful slow motion video of the hummingbirds.  It is attached below.)

The interior of the three room cave was a marvel. It contained a carpeted master bedroom with a terrace, a living room with a comfy sofa bed, a well equipped kitchen, a small dining room and a ceremonial replica kiva. All of these areas surrounded a gigantic central sandstone pillar. The cave was spacious, immaculate and decorated throughout with images of Kokopelli, (the mythical native american flutist with more id than superego) and southwestern touches (rugs, pottery, artwork) in every room. The bathroom was built entirely out of slabs of slate and jagged pieces of rock which had been constructed to create a waterfall rain shower and a sizable jacuzzi.

The cave was furnished in the 1990’s with items that were lowered from the surface by a winch and carried through the master bedroom terrace and its double door opening. The avocado green refrigerator in the kitchen was a fitting testament to that era’s design sensibility. Modern conveniences co-existed with the 65 million year old walls and ceilings of rock. The cave contained amenities such as electrical outlets, ample hot running water (thanks to two 1,500 gallon water tanks located at the surface directly above us which served the cave via a gravity feed system), a microwave, a television, a DVD/CD player, and even a bit of spotty telephone service.

I finally exhaled after we enjoyed our dinner. It was prepared in advance of our arrival by a pair of French chefs who lived a manageable distance from the cave and arranged for delivery service.  Mariah, Harry and I even watched a DVD that I packed in with me. (People who wear Keens say “packed in” all the time). Naturally, I had brought the Flintstone movie with John Goodman and Elizabeth Taylor most of the way across the United States for this purpose. Mariah said it was very “meta”.

We all slept well, Harry decorated a rock and placed it in on a naturally occurring sandstone shelf to evidence our stay (a cave tradition) and we hiked out by 11 AM. Mariah looked like a blond, young Angelina Jolie prepared to fight injustice as she bounded up the path to our car. I followed her quickly after a lizard crossed my path. Our rental Jeep Patriot looked particularly inviting this morning. 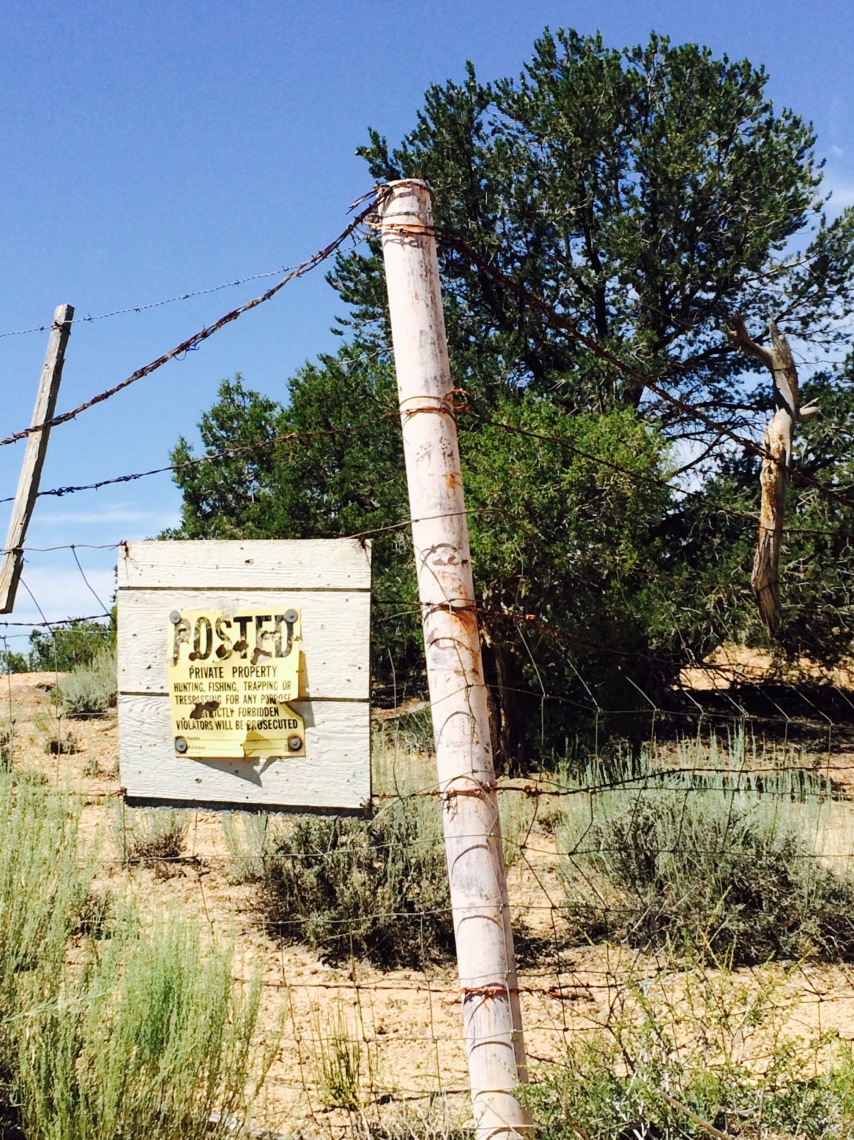 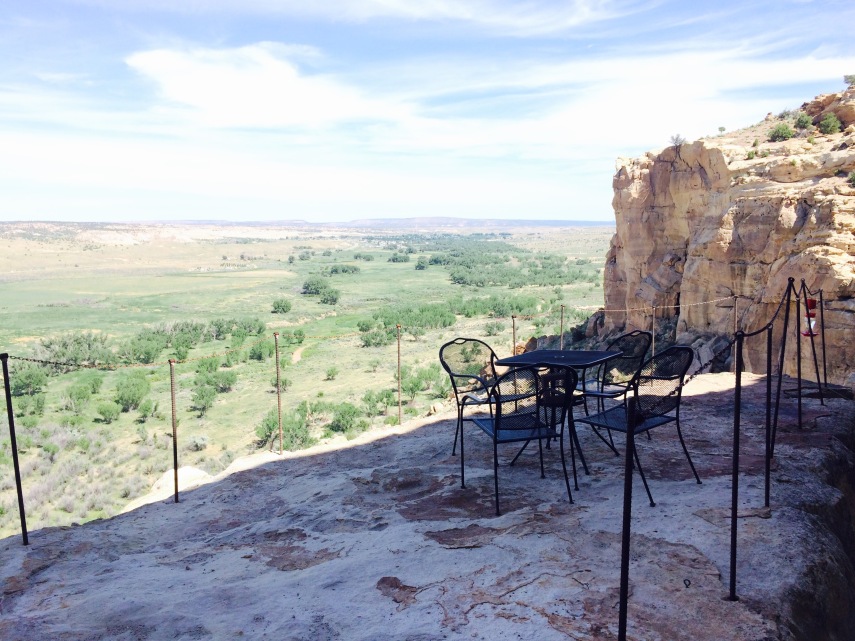 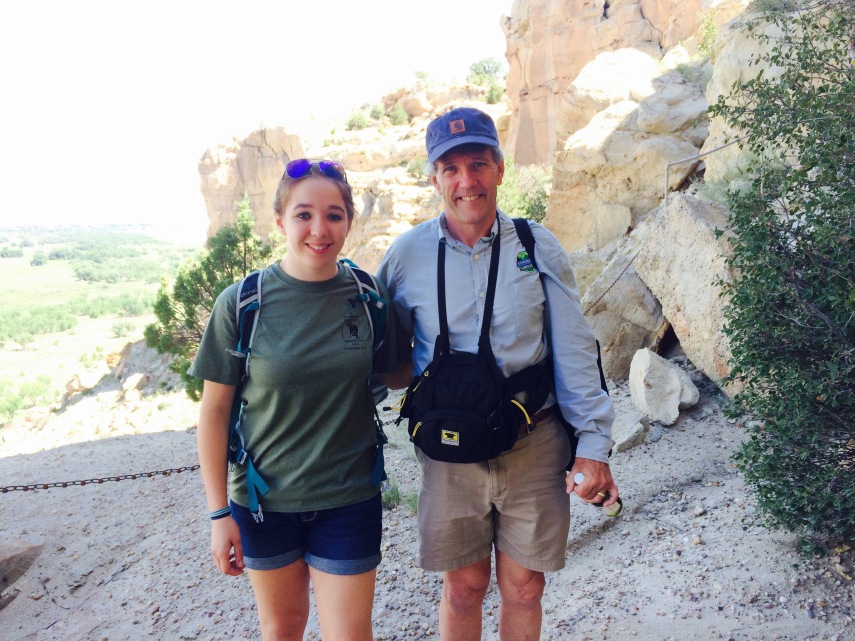 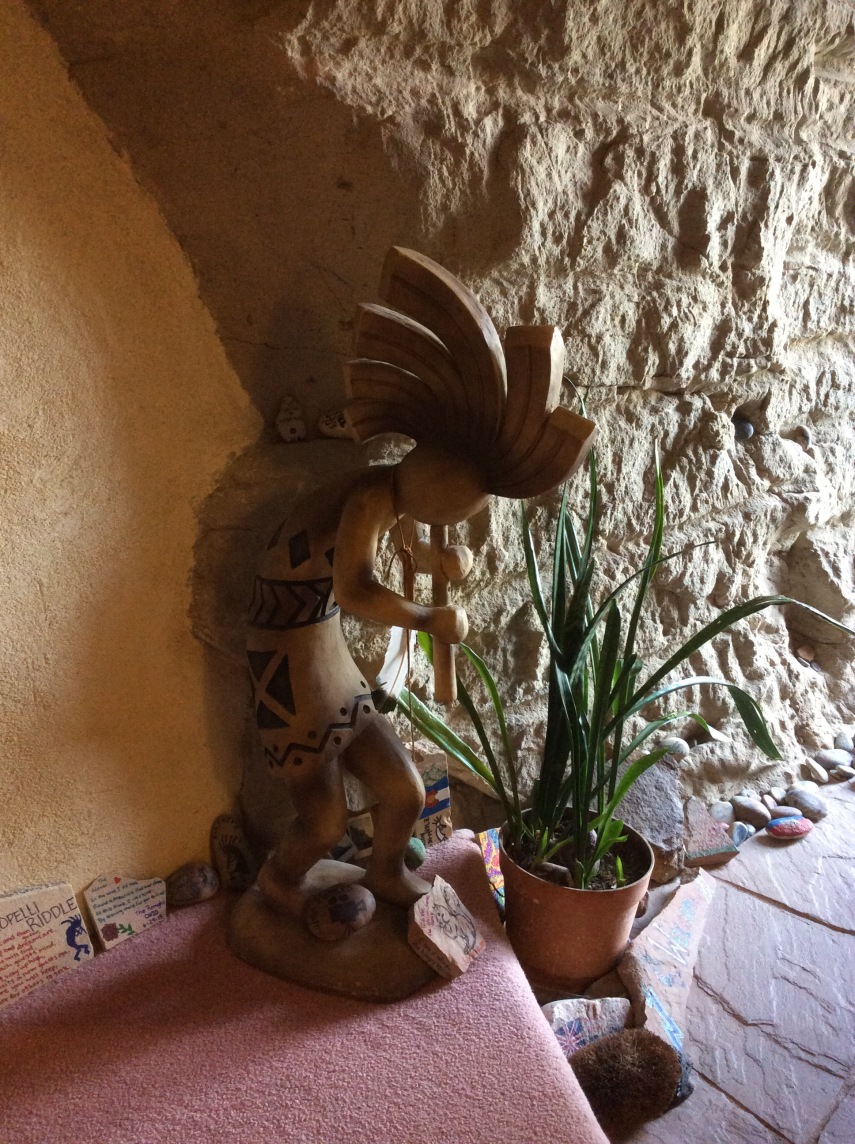 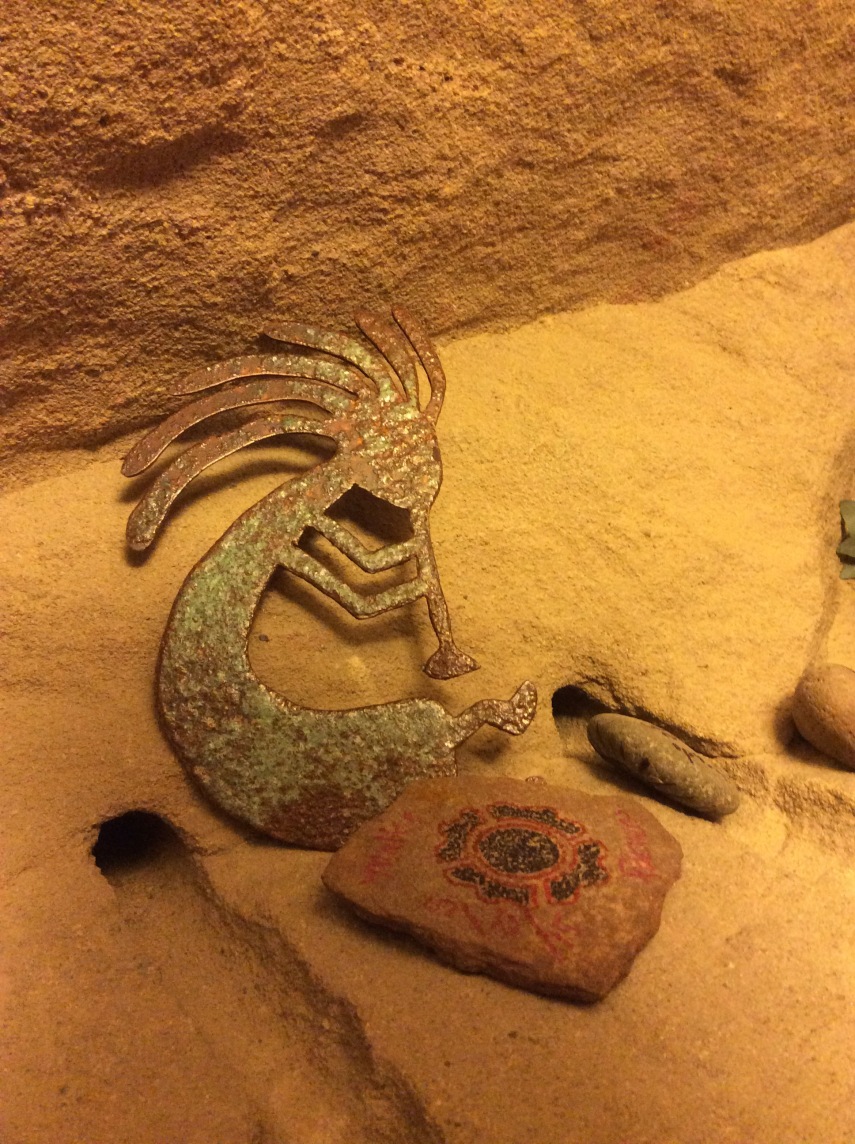 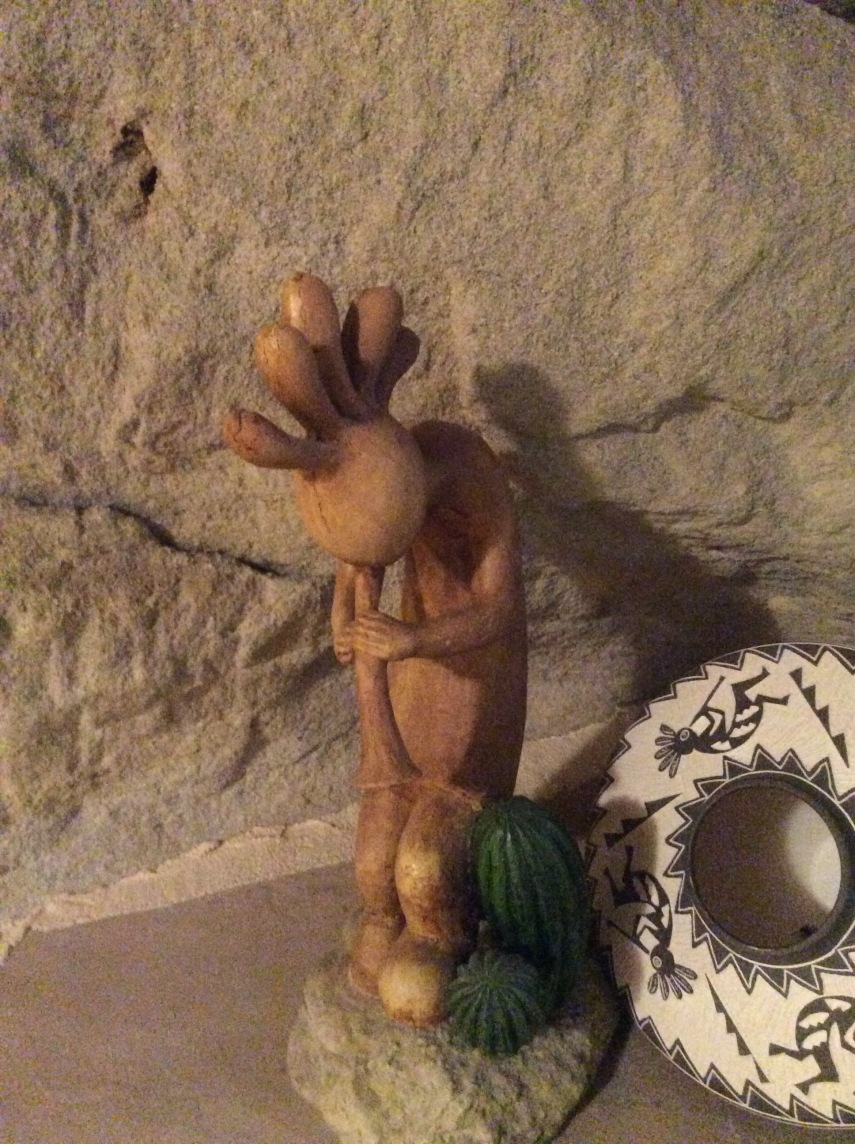 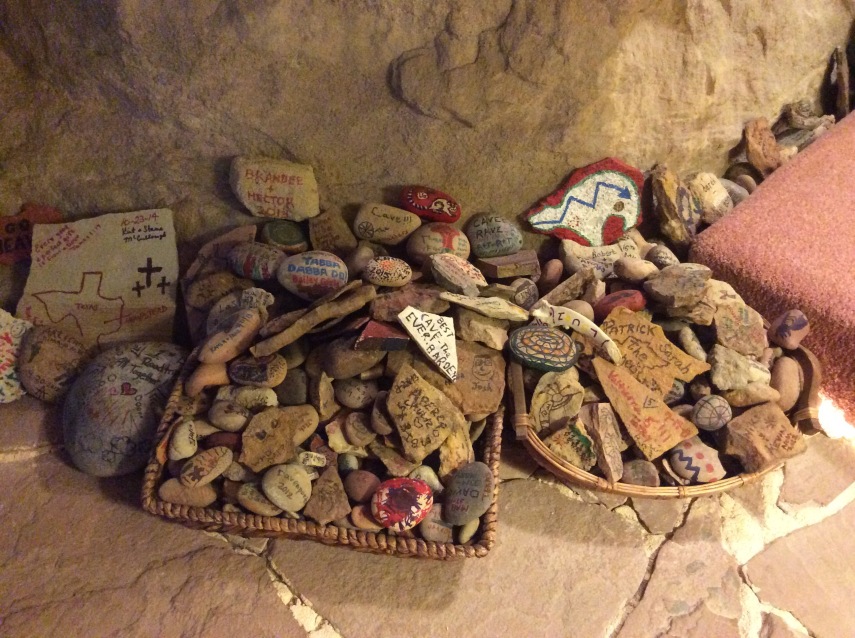 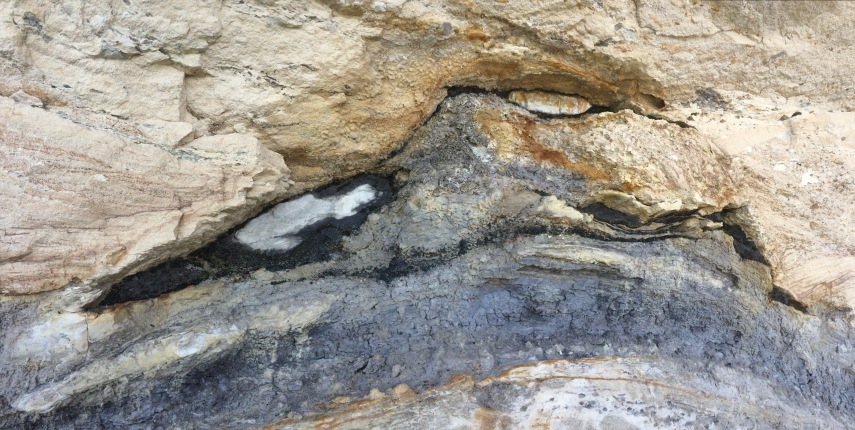